An attorney for the victim contacted law enforcement, which resulted in the LAPD sexual assault division to open an investigation on February 3, a police spokesperson told CNN. Hammer has denied the rape allegation.

On Thursday, Los Angeles attorney Gloria Allred introduced her 24-year-old client, identified only as Effie, who said she was raped by Hammer.

Effie, who lives in Europe, said she had an on-and-off romantic and intimate relationship with Hammer from 2016 to 2020. She was 20 when she met Hammer on Facebook, and she “fell in love with him instantly,” she said.

She claims Hammer would often test her devotion to him and push her boundaries. As time went on, he allegedly became “increasingly more violent,” Effie said.

“He abused me mentally, emotionally and sexually,” she said Thursday through tears.

Effie accused Hammer of violently raping her for over four hours in Los Angeles on April 24, 2017. She said he committed acts of violence against her, to which she did not consent, such as allegedly beating her feet with a crop. It hurt for her to walk for the next week, Effie said.

“I thought that he was going to kill me,” she said.

Effie said she has lived in fear of him and tried to dismiss his actions towards her as a “twisted form of love.” Effie said she even lost interest in living because of what she alleges happened to her.

In a statement, Hammer’s attorney refuted Effie’s claims as “outrageous,” saying all Hammer’s interactions with her and other partners “have been completely consensual, discussed and agreed upon in advance, and mutually participatory.” 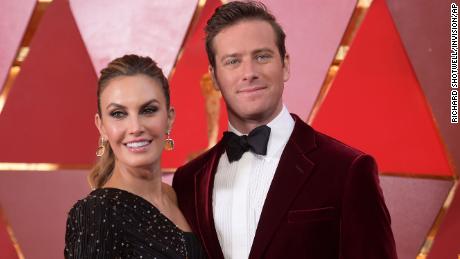 “Effie[‘s]… own correspondence with Mr. Hammer undermines and refutes her outrageous allegations,” Hammer’s attorney, Andrew Brettler, said. “As recently as July 18, 2020, [she] sent graphic texts to Mr. Hammer telling him what she wanted him to do to her. Mr. Hammer responded making it clear that he did not want to maintain that type of relationship with her.”

Brettler’s statement included what he said was a screenshot of an explicit text conversation between Hammer and Effie.

“It was never Mr. Hammer’s intention to embarrass or expose [her] fetishes or kinky sexual desires, but she has now escalated this matter to another level by hiring a civil lawyer to host a public press conference,” he said.

Allred said it has been “extremely traumatic and triggering” for Effie to speak about these allegations.

Effie said she feels immense guilt in not coming out sooner but hopes her story will inspire “survivors of sexual assault around the world” to come forward with their stories in hope of justice.

“Despite the emotional price that she has had to pay by speaking her truth, she has found the courage to discuss what she alleges has happened to her for two reasons,” Allred said. “First, she wants to warn other women who may come into contact with Mr. Hammer of possible risks in their relationship with him.

“Second, Effie has been contacted by many others who allege that they have also been victimized by Mr. Hammer in the sexual relationship that they have had with him,” she added.

Allred said there are no plans to file a lawsuit at this time, but that evidence has been turned over to law enforcement that might assist in an investigation of Hammer.

“We do think it is important that an investigation of these serious allegations is conducted,” Allred said. “We look forward to learning if Mr. Hammer, rather than his representatives, will be willing to assist investigators in their search for the truth.”

In January, the 34-year-old actor released a statement in response to allegations by his ex-girlfriend Paige Lorenze, where he stated that all sexual activities outside of his marriage were “completely consensual in that they were fully discussed, agreed upon and mutually participatory.”

Hammer, who has starred in films such as “Call Me By Your Name” and “The Social Network,”
announced last year his separation from his wife after 10 years of marriage.