Diogo Jota is relieved to be back on the pitch again and determined to play his part in Liverpool overcoming a challenging period.

The Portugal forward made his first appearance of 2021 when he came on as a 62nd-minute substitute in Thursday’s fixture with Chelsea, having been sidelined with a knee injury since December 9.

But Jota’s cameo was unable to save the Reds from suffering a 1-0 defeat at Anfield as they lost ground in the Premier League top-four race.

However, Jürgen Klopp’s men find themselves with an immediate opportunity to return to winning ways when they host Fulham in L4 on Sunday afternoon.

Liverpoolfc.com caught up with Jota ahead of the meeting with Scott Parker’s side. Read on for the interview in full… 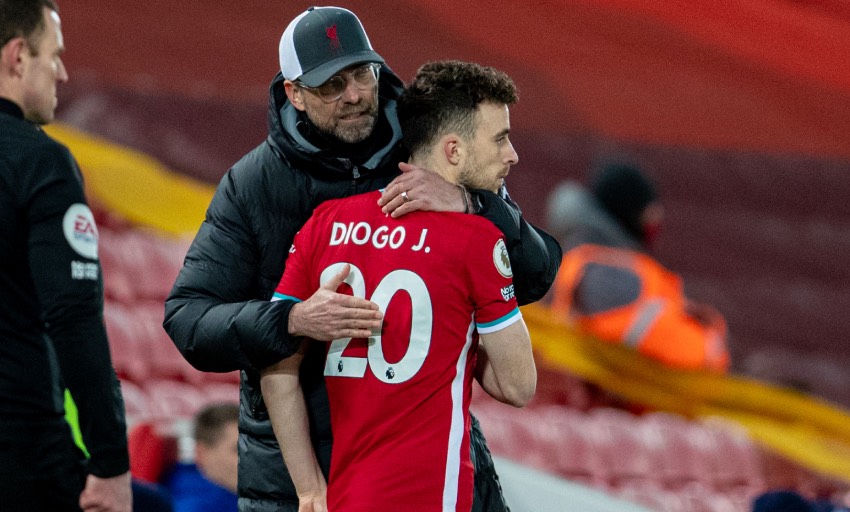 Diogo, I guess it’s mixed feelings after the Chelsea game but you must be pleased to be back out there on the pitch…

Of course. It had been a long time, since last year, so I was really looking forward to getting back on the pitch. Unfortunately, we were already losing and I couldn’t do anything to help the team in terms of the result. It’s another big blow to our season but we just need to keep on going because there’s still time.

How fit and ready do you feel for the remainder of the season?

Obviously when you are out for so long it’s not easy to get back on track 100 per cent straight away. But it was good, I played around 35 minutes and felt good. So I just need to keep training hard and with game time I think I’ll be at my best again very soon.

How much work have you been putting in to get back out there as soon as possible?

It’s working when you can’t run on the pitch, working in the gym and then working on the pitch. So I’ve been working hard and obviously it’s not the same. No matter how hard you work, it’ll never be the same as playing a football game in the Premier League. Obviously it required a little bit of time but I think I’ll be ready.

How determined are you to pick up from where you were before the injury? You were enjoying such a strong start to your Liverpool career…

Of course, against Chelsea I had the opportunity. I want to help the team and I know scoring goals is important, but at the moment we just need to all stay together because it’s a hard moment – not just for me but for the team. We all need to push from the same side and hopefully on Sunday we can get back to winning ways.

Now you’re back, what are you looking to bring to this side, who are obviously in a difficult situation at the moment?

Just a new boost in terms of confidence and, let’s say like this, freshness because obviously they’ve been playing and fighting for the club. I feel like I could be like a winter transfer. So that’s what I hope so they can rely on me and think I can help them in the future.

Fulham is a quick turnaround from the game against Chelsea and that makes it difficult. But it’s a game where you really need the three points, isn’t it?

Yeah, I think it doesn’t really matter now doing the maths – there’s still a long journey to go and we just need to grab points now in our path. The next one on Sunday is really important. I think getting the win at Anfield again, it’s been a long time and it will be really important for the team. Hopefully we can do that on Sunday.

What do you think will be key in changing the form at Anfield, where Liverpool have been so strong in recent seasons?

Even last season everyone was talking about the fortress and that kind of stuff. Obviously the fans were a big help to maintain that and we’ve lost that now, but it’s still our home and we still need to make the opponents feel like they can’t win games there. At the moment that’s not happening but we have another opportunity on Sunday to change that again.

What are you expecting from Fulham? They were unfortunate to suffer a 1-0 defeat to Spurs on Thursday…

I think they are in a good moment, despite the loss. I think they are not conceding many goals, they are doing well and they are fighting for their lives as they don’t want to be relegated. We need to equal that desire because otherwise we will struggle.