The 63-year-old talk show host revealed that she’s been staying at Courteney Cox‘s home in California.

On Thursday’s episode of “The Ellen DeGeneres Show,” the “Finding Dory” star explained that she’s currently in between homes and needed somewhere to crash for a while.

Cox was introduced as DeGeneres’ “landlord” for her virtual appearance on the show, but insisted that she wasn’t a landlord, but a “roommate.”

Later in their conversation, the comedian explained that she’s “not having marital struggles” with her wife Portia de Rossi.

“I’m not living with Courteney Cox because I’m kicked out of my house,” she said. “We sold our house here in Beverly Hills and I needed a place to stay and you were kind enough to say, ‘Yes, stay at my house.’”

While Cox, 56, was kind to let DeGeneres stay in her home, she may be regretting a bit now.

The “Friends” alum said she was “nervous” to have the talk show host stay at her home, considering she hadn’t been there in a year – she’s currently in London with her boyfriend, Johnny McDaid.

“I had it cleaned and I moved everything off the right side of the bathroom so you’d have your space and the drawers and I was just really ready for you,” recalled Cox, whose assistant walked through the house to show Cox its condition the following day. “All of the sudden, it was like, wait a minute, Ellen’s toothbrush is on my side. And then [my assistant] opened up the drawer and I was like, ‘Well, where’s my makeup?'” 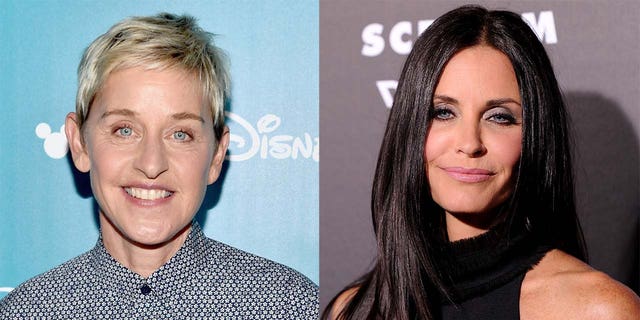 Ellen DeGeneres has been staying at Courteney Cox’s home in California.
(Getty Images)

The actress joked: “So essentially, you’re a terrible roommate, you took over my side and your side.”

DeGeneres explained, however, that the changes in the bathroom were not her fault.

“No, that was Portia who took over your side,” she insisted. “I only have one side and she happened to be there one night.”