Elliot Page is opening up in more detail about dealing with gender dysphoria at the height of his fame as a child actor prior to his recent transition.

Page, now 34, gave his first televised interview since transitioning to Oprah Winfrey on Apple TV+. During the sit-down, released on Friday, the “Umbrella Academy” star recalled the frequent panic attacks he struggled with behind closed doors at movie premieres and glamorous after-parties.

Page specifically points to a moment where he “collapsed” at an after-party for “Inception.” The Christopher Nolan-directed film starring Page, Leonardo DiCaprio and Joseph Gordon-Levitt, was released in 2010.

“There was so much press, so many premieres all around the world,” Page reflected of the craze surrounding the movie’s release. “I was wearing dresses and heels to pretty much every single event.”

Page said his manager “really believed she was helping me” by providing him several dress options to wear for the parties. However, Page now recalls it did the opposite.

“But we got back to the room and she was like ‘I have a surprise.’ I already had to wear a dress I already had picked out and I went in and there were three dresses laid out, like new dresses to maybe see, and I just like, I lost it,” Page said.

“It was like a cinematic moment, like the kind of thing that would be in a movie, you know?” Page told Winfrey. “That night after the premiere and at the after-party I collapsed and that was something that’s happened frequently in my life, usually corresponding with a panic attack.”

Despite the hardships, Page has celebrated his transition in recent months in interviews in which he expresses he is now able to live authentically. Speaking to Winfrey, Page credited the “many trans women of color” for paving the way for others and putting “their lives on the line throughout history.” 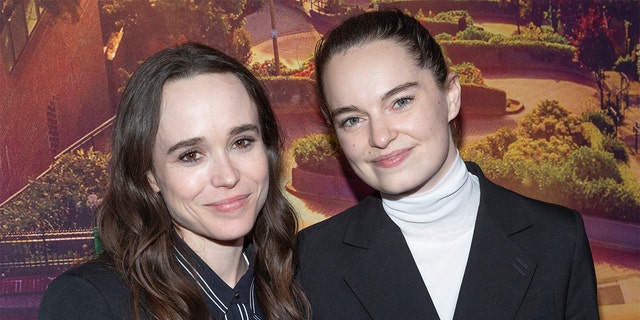 Elliot Page and Emma Portner announced their divorce in January after three years of marriage. ‘After much thought and careful consideration, we have made the difficult decision to divorce following our separation last summer,’ a statement obtained by Fox News reads. ‘We have the utmost respect for each other and remain close friends.’
(Lev Radin/Pacific Press/LightRocket via Getty Images)

Page first came out as transgender in December 2020 on Twitter.

His announcement came six years after he publicly came out as gay at a conference in Las Vegas for educators and counselors who work with gay youth. In 2018, the star married partner Emma Portner although the two announced early in January they are divorcing.

In his initial statement, Page asked for “patience” as he navigates his transition. While admitting that his “joy is real,” the Hollywood star reminded fans that it’s also a “fragile” thing to come out.

Ahead of Page’s sit-down with Winfrey, he discussed how the transition has changed his life.

“The most significant difference is that I’m really able to just exist. I would imagine you’ll understand where I’m coming from — just exist by myself, like be able to sit with myself. Not have some constant distraction, all these things that aren’t conscious or aren’t even overly overt,” Page told the outlet.

“For the first time in I don’t even know how long, [I am] really just being able to sit by myself, be on my own, be productive and be creative. It’s such an oversimplification to say it this way, but I’m comfortable. I feel a significant difference in my ability to just exist — and not even just day to day, but moment to moment.”