“It often manifests as just complete disagreements on how to raise kids,” said Bracho-Sanchez.

To navigate the complexity, she tells her families that she would never judge parents or accuse them of not loving their kids any less if they’re afraid of vaccinations. She just asks that they talk about it.

For some childhood vaccines it can take years, but skeptical parents often come around.

She is now applying those hard won experiences, in a more accelerated way, nudging families toward getting shots for their kids in how she talks with her own family members hesitant to get their Covid-19 shot.

“These are new vaccines and that comes with a reaction and a fear that is very real,” she said. “I think we also have to remember there is massive misinformation out there.”

Her skills, and those of pediatricians like her, can help you as you talk with your own loved ones about getting protected against Covid-19.

More than 100 million Americans have received at least one dose of Covid-19 vaccine, according to the Centers for Disease Control and Prevention.

And openness to the vaccine is rising, with 74% of Americans reporting that they’re willing to get a Covid-19 vaccine or that they’ve already received one, according to a
Gallup poll published on March 30. That number is up from 65% from December.

Still, though, some 26% of Americans say they would not get a vaccine right now.

Getting the country over the threshold of herd immunity means finding ways to persuade at least a portion of the people still hesitant to get their shot.

Give people space, and listen to their concerns

For many, Covid-19 vaccine hesitancy manifests simply as a fear of something new.

“It is a normal human reaction to be afraid. Fear is very real. It does not make you stupid. It’s normal,” Bracho-Sanchez said. “They’re having a normal reaction and perhaps they haven’t been able to sit down with their physician.”

Look for a time to have a calm, rational conversation, where neither person is angry or likely to start a fight. 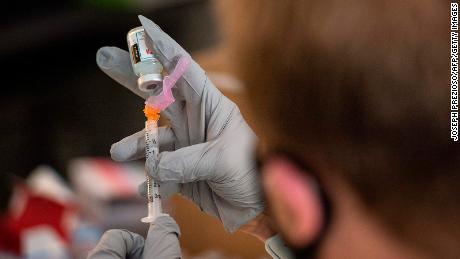 “The first thing I would say is ‘I get it. I totally get where you’re coming from and I understand that you’re concerned about this,'” Bracho-Sanchez said.

As you’re having a conversation with loved one, she emphasized being an active and empathetic listener.

“If you really care about someone and you’re trying to help them think through something that could be beneficial for their health, if you yell, if you are condescending, if you share too much that they’re not willing to hear, you might lose that bond, and it closes the door for future conversations,” she said.

As a pediatrician, Bracho-Sanchez has succeeded by nudging parents over the course of multiple conversations.

Skepticism to existing vaccines — such as that for measles, mumps and rubella — has been driven by concerns such as a spurious link to autism, which has been disproven by a significant body of research.

Study after study has shown that vaccinations are safe and effective for preventing disease.

And the track record for the Covid-19 vaccines has been particularly strong. Adverse reactions are extremely rare and the vaccines manufactured by Pfizer and Moderna, for instance, have shown an ability to prevent disease well above 90%.

“I think it’s important to note that the more that a group of people know about the vaccine, the more likely they are to take it,” said Dr. Susan Bailey, president of the American Medical Association.

Click Here To Shop
Last week, Pfizer
released six months of data showing its vaccine is safe and effective. Steps like that could help satisfy holdouts. Some 23% of those opposed getting the vaccine cite wanting “to wait to confirm it is safe,” according to
Gallup.

“That’s another common question that people have, ‘Well I want to wait a while and see how it goes. Well, we have waited a while and everything still looks great,” Bailey said. “The bottom line is the greatest risk is not getting the vaccine and becoming ill with Covid.”

She recommended pointing people to
Get Vaccine Answers, a website created by the Ad Council, which offers clear explanations on how the vaccines work, how they were authorized for use, and what it feels like to get vaccinated.
And CNN has
created a resource with helpful, scientifically informed responses to common issues that those who aren’t sure yet about the vaccines often bring up.

“There are groups of people who are vaccine hesitant because it’s part of their social identity,” said Dr. Richard Pan, a pediatrician and a California state senator, who co-authored 2015 legislation to remove personal belief as a reason for vaccine exemptions.

“Before it was crunchy white moms who were into wellness and essential oils. That was the stereotypical vaccine hesitant mother.”

Pan, a Democrat, cited a recent study by the
Kaiser Family Foundation that found 29% of Republicans and 28% of White evangelical Christians say they will “definitely not” get the vaccine.

“They’re the ones who don’t think the Covid virus is that serious. They say that mask-wearing doesn’t help or is for sissies,” Pan said.

While three in 10 are opposed, that still means a majority have either gotten vaccinated or plan to.

“In political terms, that’s a landslide. It’s over two-thirds,” he said.

One way to bring the remaining white conservatives on board, he added, is recognizing that most of them are already doing the right thing. And people often mimic the behavior of others in their social group.

“When they hear that you chose to vaccinate, they’ll consider it because you’re part of their social circle,” Pan said. “That becomes the social norm for your immediate social circle.”

Sometimes, the best approach for Bracho-Sanchez is to get personal with new parents during their kids’ appointments.

Her reason was getting the Covid-19 vaccine was simple. She was pregnant. She tells how she got the shot during her second trimester even when minimal data about the vaccines’ performance was available.

Believing in the mantra, “Healthy mom, healthy baby,” she wanted to be protected because she knew getting Covid-19 was worse.

“It was really well-received,” she said. “Moms would be like, ‘Really? You did?‘ And they paused and sort of thought about it.”

“Another strategy is to find out what that person is interested in and what they have been missing since the pandemic began,” Bailey said. “Are they missing being with relatives? Are they missing events they used to attend? Have that person understand that the quickest way for us all to get back to those things that we miss is for 70% to 80% of the population to be vaccinated.”

The CDC dangled another incentive on April 2, revising its
travel guidelines to say that those who are fully vaccinated are clear to travel at low risk to themselves.
Some people, who were infected and subsequently plagued by long Covid symptoms, have reported
feeling better after their vaccinations.

Stories like that could be a light at the end of the tunnel for those who’ve had a rough go of it living through the actual virus.

Help them schedule the appointment

And finally, vaccine hesitancy could be a matter of just being unsure about how to actually make the appointment and get to the vaccination site.

“Help them schedule it,” Bracho-Sanchez said. “Especially people who are afraid will be like ‘OK, yeah, I think I’m going to do it.’ And then they don’t. It’s sometimes just because the logistics are a little bit of a hurdle.”

Pull up your local public health’s department’s website together. Offer to drive them to the clinic to make it a little easier.

“If you care about someone, you should help them,” she said. “Say ‘Let’s do this together. Let’s do something, so if you get vaccinated, let’s grab dinner after. Let’s celebrate together.’ Just something extra like that to show that you care.”