Sky Sports News reported earlier in February that the young Bayern star would be called up by Germany’s senior squad and England’s U21s ahead of the next international break scheduled for the end of March.

Musiala, born in Stuttgart to a German mother and British-Nigerian father, has represented England at youth team level on 22 occasions and took part in the last two training camps with Aidy Boothroyd’s U21 side.

However, despite admitting to being torn between the two countries, the 17-year-old confirmed that he wishes to represent the country of his birth.

“I’ve thought about this question a lot,” he told The Athletic. “What is best for my future? Where do I have more chances to play?

“In the end, I just listened to the feeling that over a long period of time kept telling me that it was the right decision to play for Germany, the land I was born in.

“Still, it wasn’t an easy decision for me. England is home for me. It is difficult to find words for what England means for me because I have so many memories connected to very positive emotions.

Musiala has played for England’s U15s, U16s, U17s and U21s but also played football for Germany’s U17s. He captained England’s U17s side in a friendly against their German counterparts in 2019.

England manager Gareth Southgate had made it clear to the teenager he wanted him to remain in the England fold, but recommended he stayed with the U21s due to a lack of opportunities to play ahead of the Euros in the summer.

In the meantime, Germany boss Joachim Low publicly stated his intention to call Musiala up to his senior squad in January, saying the “ball is in his court”.

Low is rebuilding his Germany team still reeling from World Cup disaster in 2018, and axed stalwarts such as Mats Hummels, Thomas Muller and Jerome Boateng in favour of up-and-coming young stars.

Musiala is expected to sign his first professional contract with Bayern on his 18th birthday on Friday.

The young attacking midfielder produced a stellar performance in Bayern’s triumph over Lazio in the Champions League round-of-16 first leg on Tuesday.

He scored Bayern’s second goal in their 4-1 win, becoming the club’s youngest-ever scorer in the competition, having achieved the same feat for the club in the Bundesliga during their 8-0 win over Schalke in September. 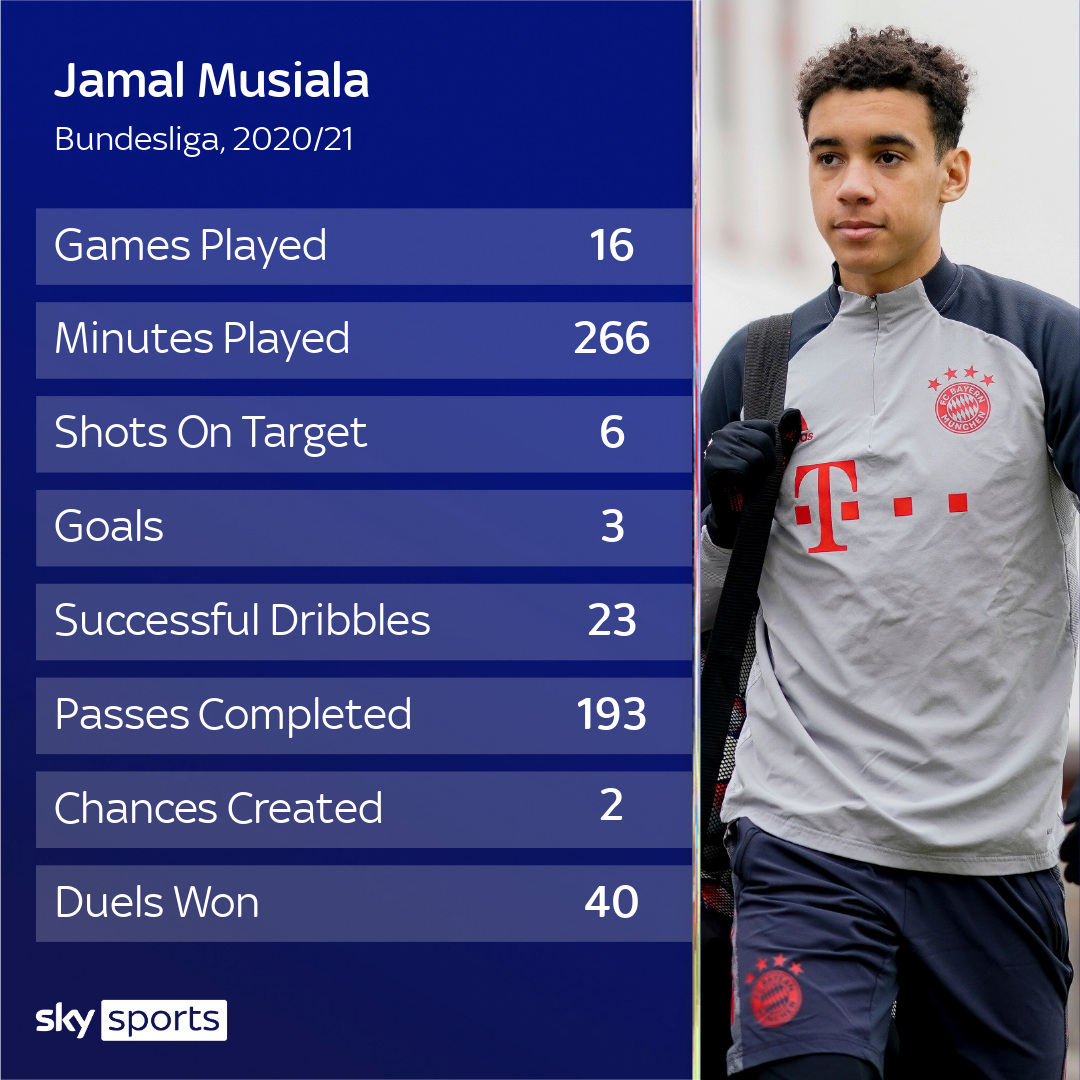 Born in Stuttgart in 2003 to a British-Nigerian father and German mother, Musiala lived in Germany until he was seven before moving to England.

The attacking wide player began his playing career on Chelsea’s books having moved to Stamford Bridge in 2011 following a brief spell with Southampton.

He was enlisted at the Whitgift School in Croydon, where Callum Hudson-Odoi, Victor Moses and Bertrand Traore all spent their formative years of education.

But Musiala left the club’s academy in July 2019 and was snapped up by Bayern and has continued his development with the Bundesliga club’s junior teams.

Such was the impression he made, Musiala was fast-tracked from Miroslav Klose’s Under-17s side to the first-team squad.

He became the youngest player to appear in the Bundesliga for the club when he made his debut against Freiburg in June, aged just 17 years and 115 days.

Records have continued to tumble.

Back in September, aged 17 years and 205 days, Musiala became the club’s youngest ever goalscorer during Bayern’s 8-0 win over Schalke, eclipsing a 21-year record set by Roque Santa Cruz.

On Tuesday, Musiala struck his first Champions League goal in only his fourth appearance in the competition making him the second-youngest player to score in the knockout stages, behind Bojan (17 years, 217 days) for Barcelona against Schalke in the quarter-finals in 2007/08.

What his manager has said

Having become the youngest English scorer in the Champions League, Bayern manager Hans-Dieter Flick praised the 17-year-old for his “great eye and feeling for choosing the right spaces”.

“We are happy that Jamal made a great performance and so did the whole team,” Flick said. “Of course, his goal made him stand out. He is very confident on the ball and can play well between the lines.

“He has a great eye and feeling for choosing the right spaces. So, he did his job well, just like everyone else. We’re always happy about a goal and we are very satisfied.

“It was decisive to have someone like him, as we need possession and we wanted to outnumber the opponent in the different zones between the lines and the half spaces. He did that very well.”

Could he move to the Premier League?

It is unlikely that Musiala will grace the Premier League any time soon, with the player expected to sign a new long-term contract with Bayern on his 18th birthday in two days’ time.

His three goals in 16 league appearances predominantly as a substitute this season under Flick points to a pathway that is unimpeded by the presence of more established names, and his progress is only likely to lead to further cases of young English players taking the same route.

The Guardian reported last week that the former Chelsea starlet is on the verge of ending any uncertainty about his future. The report claimed that Musiala will sign an incentivised contract running until summer 2026.

His commitment to the Allianz Arena on a bumper new £100,000-a-week five-year deal will end speculation regarding his club future having reportedly caught the attention of Liverpool and Manchester United.