Jodie Foster broke her silence on whether or not she set up her “The Mauritanian” co-star, Shailene Woodley, with NFL star Aaron Rodgers.

The Green Bay Packers quarterback revealed he was engaged while making his acceptance speech for the NFL’s MVP Award on February 6.

“2020 was definitely a crazy year filled with lots of change, growth, some amazing, memorable moments,” the 37-year-old said. “One hundred-eighty straight days of having my nose hair scraped, a plan for very little fans or no stands the entire season, I got engaged, and I played some of the best football of my career.”

Although Rodgers did not mention Woodley by name, he and the “Big Little Lies” actress, 29, had been previously linked.

Meanwhile, in his speech, Rodgers also thanked Foster which made fans think she must be the common link but Foster claimed she doesn’t know Rodgers, she’s just a vocal Packers fan.

“You had no idea he was going to say this?”Jimmy Kimmel asked while the actress-director made an appearance on “Jimmy Kimmel Live” Thursday night.

Foster answered, “He just knows I’m his biggest fan.” The 58-year-old skirted around the engagement question.

Kimmel asked, “He mentions his fiancée, who is Shailene Woodley, who is your co-star in this particular movie. And that’s just a total coincidence?”

The Oscar-winner replied, “I don’t know if that’s a coincidence, but yes, she is, and she’s fantastic. So we spent a lot of time on ‘The Mauritanian’ together in a little tent with a little air-conditioning spitting at us, talking about our lives and recipes and people we hate and things like that.” 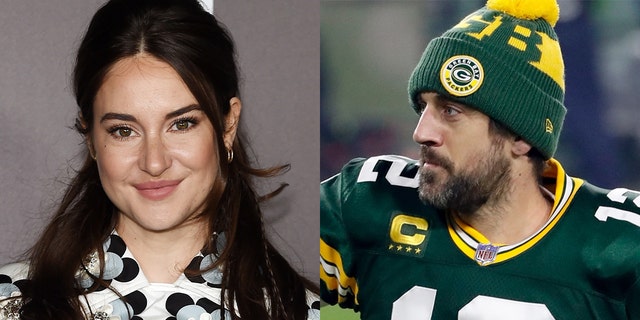 A source told E! News that Rodgers and Woodley, 29, have been a “low key” couple for a while.

Rodgers previously dated Danica Patrick for two years but they split in July. Prior to that, he was romantically linked to actress Olivia Munn from 2014 until 2017.