Scorsese is now filming his Apple-backed Western epic in Oklahoma.

Apple has unveiled the first official photo from Martin Scorsese’s upcoming Western epic “Killers of the Flower Moon.” The first look image features Leonardo DiCaprio and Lily Gladstone as Ernest and Mollie Burkhart. Ernest is the son of a powerful local rancher, played in the movie by Robert De Niro. “Flower Moon” is based on David Grann’s non-fiction book and tracks the investigation of serial murders that plagued the Osage Nation during the 1920s after valuable oil was discovered on their land.

As IndieWire reported last month, Scorsese kicked off filming “Killers of the Flower Moon” on April 19 in Oklahoma. Cameras were originally set to begin rolling on the movie in March 2020, but the coronavirus pandemic delayed production indefinitely. The film is the latest collaboration between Scorsese and DiCaprio, who appeared in “The Aviator,” “Gangs of New York,” “Shutter Island,” “The Departed,” and “The Wolf of Wall Street.” DiCaprio was Oscar nominated for “The Aviator” and “The Wolf of Wall Street.” Gladstone is best known for her breakout role in Kelly Reichardt’s “Certain Women,” but “Flower Moon” is bound to become her highest-profile acting gig to date.

“We are thrilled to finally start production on ‘Killers of the Flower Moon’ in Oklahoma,” Scorsese said in a statement announcing the official start of production last month. “To be able to tell this story on the land where these events took place is incredibly important and critical to allowing us to portray an accurate depiction of the time and people. We’re grateful to Apple, the Oklahoma Film and Music Office and The Osage Nation, especially all our Osage consultants and cultural advisors, as we prepare for this shoot. We’re excited to start working with our local cast and crew to bring this story to life on screen and immortalize a time in American history that should not be forgotten.”

Check out a closer look at DiCaprio and Gladstone’s characters in the photos below. Apple is backing the film’s budget while Paramount will handle the movie’s worldwide theatrical release. The film does not yet have a release date. 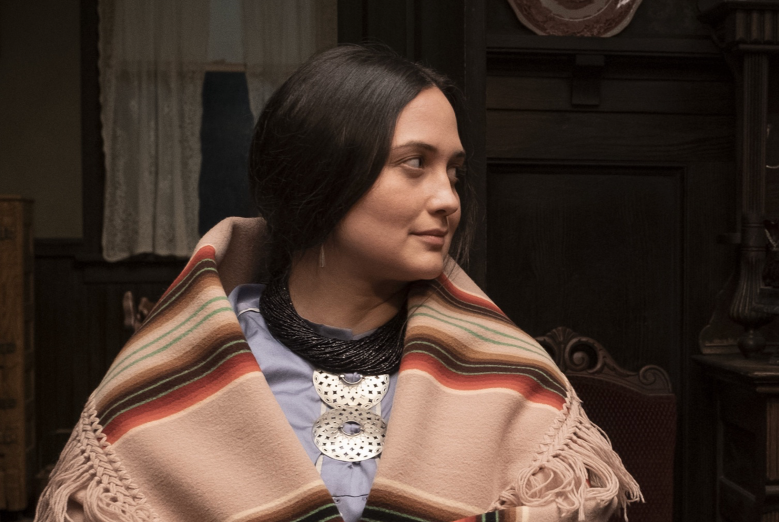 Sign Up: Stay on top of the latest breaking film and TV news! Sign up for our Email Newsletters here.