Yum! Brands, Inc (NYSE:YUM) subsidiary KFC Canada said on social media Wednesday that it accepts Dogecoin (DOGE) in response to a customer query but the restaurant operator wasn’t really serious about it.

What Happened: Early Wednesday, KFC tweeted that it accepts DOGE after a customer inquired if they could pay with the cryptocurrency.

KFC’s response was captured as a screenshot and posted on the Reddit forum r/dogecoin by a user with the handle u/AaronGagnon_1983. 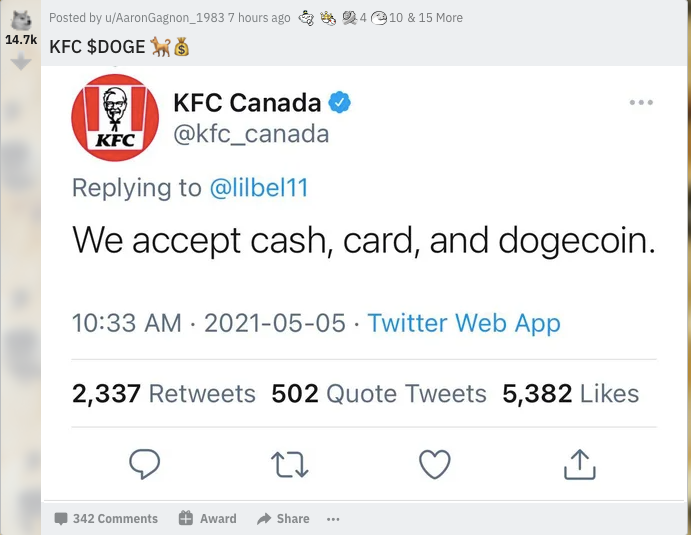 A check on KFC’s Canada website revealed that, as of press time, the only means to pay for online orders are credit card and Google Pay, the Alphabet Inc (NASDAQ:GOOG) (NASDAQ:GOOGL) subsidiary Google’s payment app.

Why It Matters: This is not KFC Canada’s first encounter with cryptocurrency. In 2018, the company launched the “Bitcoin Bucket” in a tongue-in-cheek campaign. The present DOGE tweet also seems to have been made in a similar vein.

Last year, KFC faced criticism after it allegedly exhibited sexism in an advertisement in Australia, which was followed by the company issuing an apology that earned it further criticism.

The Shiba Inu-themed cryptocurrency has garnered the attention of social media investors, but also found some love from companies and team sports.

Read Next: A Company Is Capitalizing On GameStop, Dogecoin Mania To Sell…Noodles

© 2021 Benzinga.com. Benzinga does not provide investment advice. All rights
reserved.