“It’s been a tough week for news,” Nwodim’s anchor said. “There’s so much to get into, but first we start with the trial of Derek Chauvin.”

Nwodim’s anchor said that watching the trial brought back “so many bad feelings” from last summer.

“Sounds like we all agree there’s no way that Derek Chauvin walks away from this,” McKinnon’s anchor said.

Nwodim and Thompson’s anchors stopped her there.

McKinnon’s anchor noted that “historically, police have gotten away in other cases like this.”

Moffat’s anchor then tried to jump in, saying that he wanted to pick his words carefully when talking about subjects like race.

“To quote Thomas Jefferson…” he began.

McKinnon’s anchor then said that the morning show team should get another opinion, so she asked the show’s Black weatherman, played by Chris Redd, to join in.

“Man, don’t put me into this mess!” Redd’s weatherman said. “I’m still in hot water for being in that
Paul Pierce video.” 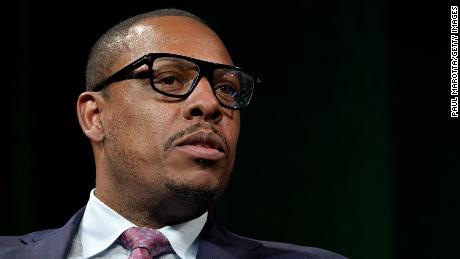 The news team then tried to move on to other big stories from the week.

McKinnon’s anchor tried to correct her colleague by saying she was talking about “the prince.”

Moffat’s anchor explained that she meant
Prince Philip of England.

The team then tried to find another story they could all agree on, but before long the anchors gave up and just said the show’s opening catchphrase, “Live… From New York! It’s Saturday night!”